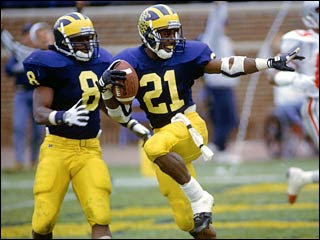 Many people cannot recall precious sports moment from the year of 1991.  There are a few that come to mind, I was nine years old when the infamous “Wide Right” missed 34 yard field goal by Florida State Seminoles in a match up of #1 vs. #2 against the Miami Hurricanes at Doak Campbell Stadium.

The other moment I clearly remember was Desmond Howard returning a 92 yard punt vs. Ohio State; then once in the end zone striking the “Heisman” pose that would be mocked for years to come by potential Heisman candidates.  I remember everyone talking about that game and it was a moment to remember.

Desmond Howard and fifteen other players and four coaches were enshrined as the 2011 class of the College Football Hall of Fame.  When asked about the honor: “Time just flies doesn’t it? Twenty years is unbelievable. That’s one of those things when somebody says it you kind of got to do the math in your head, like `Yeah I guess he’s right,”’

Two other notable additions to the 2011 class are Pat Tillman and Charles Haley.

Tillman along with Byrd, and Kobrosky were enshrined posthumously. After his college days, Tillman went on to an NFL career with the Cardinals. After three seasons in the NFL, he enlisted in the Army. He was killed in Afghanistan in April 2004.

When Tillman’s bio was read during the enshrinement dinner Saturday night, he was given a standing ovation by the crowd.

Haley emerged from little-known James Madison to become one of the NFL’s most ferocious pass rushers and played on five Super Bowl championship teams with Dallas and San Francisco.

“I never dreamed of going to college and when I got to college I never dreamed of going to the pros,” Haley said. “I was fortunate enough to have coaches to be visionaries and build a foundation and give me a skill set. … It’s not all about how athletic you are, it’s about having the smarts to understand all the pieces of the puzzle that is going around you at the time.”

Having a college HOF and a professional HOF is needed; many players and coaches that attend small schools achieve great things at the collegiate level. The College Football Hall of Fame is a great platform to acknowledge those were never made it to the professional game.  To honor the new class, I will break in my recently purchased NCAA 2012 Football game for XBox.