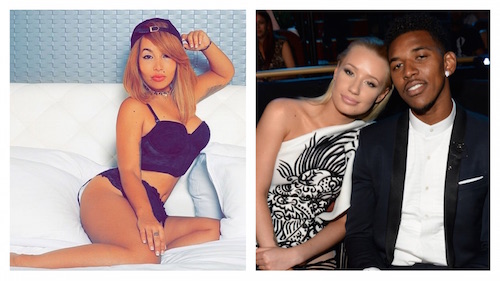 Donatella Panayiotou seems a bit upset with Swaggy P. Instead of keeping things to herself she decided she would try to derail Swaggy P’s marriage before it even happened.

Brit TV star Donatella Panayiotou claims she started seeing the basketball player a month before he began dating the Australian rapper in 2013 and he allegedly LIED about being with her.

Speaking to The Sun on Sunday newspaper, she said: “Nick would lie and say, ‘We’re not together’. He even claimed a photoshoot of them was just modelling.”

The MTV host, 31, claims she was seeing the LA Lakers star for eight months but their sex life was pretty disappointing because he wasn’t very good in bed.

She blasted: “Sex was over really quickly. He’s say, ‘I just need to get used to you.’ That didn’t happen.” Claws out!

But despite their steamy sessions not lasting very long, Donatella says she was very attracted to him and loved his tattoos, claiming they had a real connection.

The brunette beauty thought she was the only woman in Nick’s life until she allegedly found Iggy’s hair clips in his bathroom in May 2014 – the last time they slept together.

She is being petty and sounds hurt he chose Iggy over her.

FLIP THE PAGES FOR MORE OF DONATELLA…