Sad Cowboys Fan Who Went Viral For Consoling His Lady Was Actually Caught in 4k Cheating; His Real Girlfriend Speaks Out – BlackSportsOnline 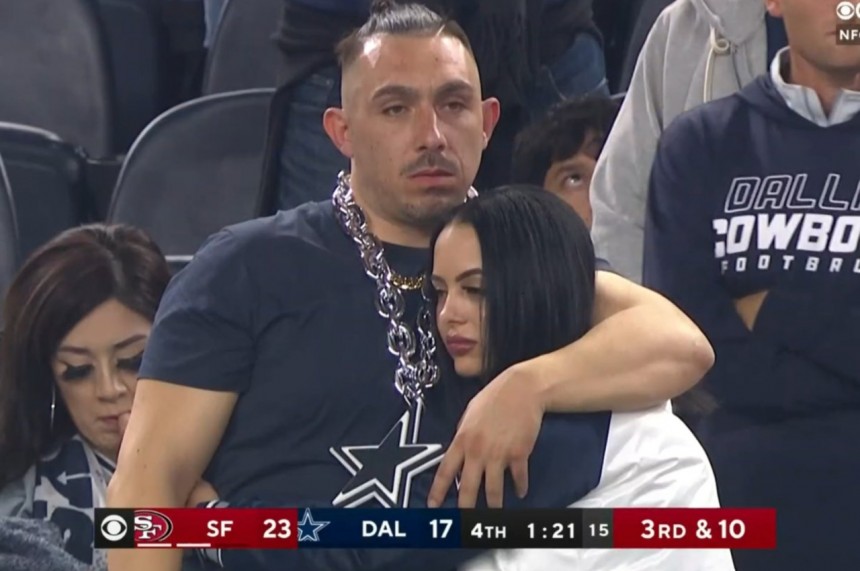 If you’re not a Cowboys fan, one of the best parts of their loss to the 49ers on Sunday wasn’t them losing. It wasn’t even how they lost the game, even though that was pretty funny because they lost in perfect Cowboys fashion.

The best part was the cameraman being very petty (they must not have been a Cowboys fan) and showing the fan reactions in the stands as they knew their team was once again going to lose before getting to the Super Bowl.

Social media and Stephen A. Smith had a lot of fun at the Cowboys fans’ expense.

The Dallas Cowboys, as we all know by now, had their season come to an abrupt end yesterday when they couldn’t get a snap off before the final whistle and lost at home to the 49ers, 23-17.

It was an embarrassing end to a season that had a lot of promise for a Cowboys team that has way too much talent to not win a playoff game.

If you watched the game then you probably saw all the shots of sad Cowboys fans in the stands as the fourth quarter ticked down.

Well, on ESPN’s First Take today Stephen A. Smith, who doesn’t like the Cowboys, had a lot of fun laughing at those fans, all with former Cowboys legend Michael Irvin sitting by his side.

It sucks to be that guy.

Flip the page to see the post and reactions.

Prev1 of 9Next
In this article:Headline, NFL, sad cowboys fan