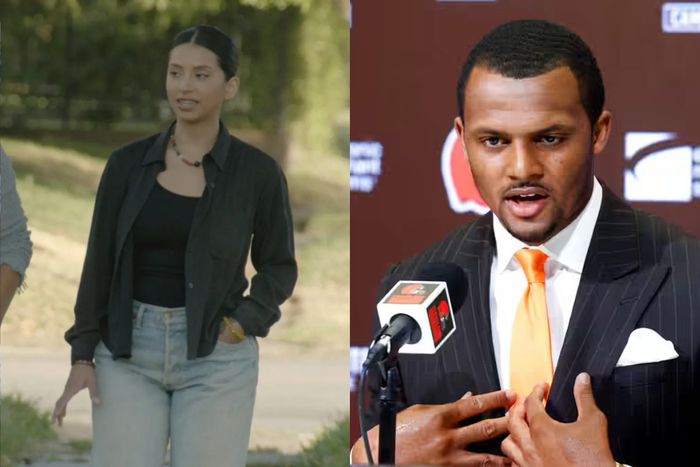 Two of Deshaun Watson’s accusers Ashley Solis and Kyla Hayes aren’t happy about his $230 million contract and they made this known during an interview with Soledad O’Brien for HBO’s “Real Sports with Bryant Gumbel”.

According to TPS, the women spoke about their encounters with Browns Deshaun Watson.

ASHLEY SOLIS: As I’m working, he deliberately grabs himself and put his penis on my hand. And I pulled my hand away instantly, and I started crying. And I told him that I’m done. I don’t wanna do this anymore.

KYLA HAYES: He wanted me to kinda make a V motion in his pelvic area. So go across his stomach to his thighs, back to his stomach. I just kept massaging and did what he asked until his penis kept touching me repeatedly as I did it. He was moving his penis back and forth as my hands moved as well.

SOLEDAD O’BRIEN: It allowed him to, kind of, put his penis on to your hands?

O’BRIEN: And you thought that was intentional?

HAYES: It was intentional

O’BRIEN: So how did it end?

HAYES: At some point, he did ejaculate. That was mortifying and embarrassing and disgusting.

Solis and Hayes on the Cleveland Browns rewarding him with a $230 million contract following his trade from the Houston Texans had this to say;

SOLIS: It’s just like a big screw you. That’s what it feels like. That we don’t care. He can run and throw, and that’s what we care about.

HAYES: It was sick to me.

HAYES: I felt like he’s being rewarded for bad behavior.

TONY BUZBEE (Lawyer for Watson accusers): I don’t think the team cares about what Deshaun Watson may have done in a massage session. And based on my personal experience with the NFL, I don’t think they care either.

Deshaun Watson has “denied misconduct relating to the massages and maintained that any sexual activity was consensual” but still facing “potential discipline under the NFL’s Personal Conduct Policy.”