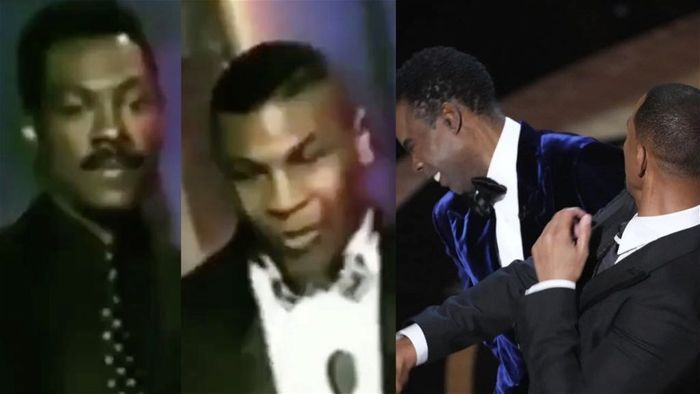 Eddie Murphy was lucky Mike Tyson isn’t Will Smith, like he would have been the first comedian to be slapped on stage before Chris Rock. A throwback video clip of Tyson almost slapping Eddie Murphy on stage has resurfaced in the wake of Will Smith slapping Chris Rock at the 2022 Oscars to please his wife Jada Pinkett Smith.

The former two-time heavyweight champion, Mike Tyson, once shared a stage with renowned actor and comedian, Eddie Murphy. Interestingly, the comedian did ‘The Baddest Man On The Planet’ impression in front of him. This rare moment witnessed Tyson almost Chris Rock’ed Murphy.

A rare video clip of Tyson is catching the attention of fans on social media platforms. The clip displayed Tyson paying tribute to an American singer on a show hosted by Eddie Murphy.

Tyson said, “Stay tune for more of the Sammy Davis Jr. Tribute honoring the one heavyweight I would never dare to step into the ring with. Sammy you’re truly the undefeated champion.”

After saying this, the comedian made a hilarious Tyson impression. He said, “Helloladies and gentlemen Sammy I would like.”

Meanwhile, Tyson felt embarrassed, and he covered Murphy’s face with his hand around the neck and took him off the stage before the latter could complete.

Notably, it is quite similar to a recent incident between Will Smith and Chris Rock at the Oscar award ceremony. Therefore, fans reacted by connecting it to Will Smith’s controversy.

One fan wrote, “Eddie was lucky it wasn’t Will.”

Here are some reactions from social media folks;

Another fan wrote, “Imagine if Eddie was trying to mimic Jada.” “Imagine if Mike react like Will,” added another fan.

Another social media user wrote, “Back then he was punching people for looking at him wrong, he must be a fan of Murphy.”

Yet another fan wrote, “His life flashed before his eyes when Mike headlocked him tho.”