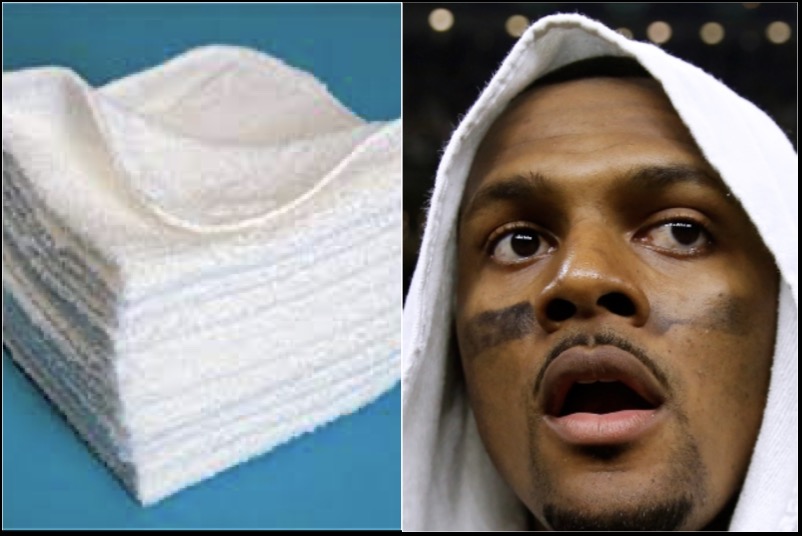 Deshaun Watson’s massage lawsuits are on and in the latest dramatic episode of the allegations, it’s revealed that he brought his own personal towels to massage sessions because he had intentions to have sex with the women offering the massages.

According to the latest reports from USA Today, the Cleveland Browns QB would bring a small to medium sized towel with him when getting massages instead of using a regular one that would be supplied to him.

Defense lawyer Tony Buzbee claimed that him bringing his own personal towel to massage sessions is evidence of his intent for sex.

“This is the towel I’m gonna use,” Watson said he told a massage therapist in March 2020, according to the deposition transcript obtained by USA TODAY Sports.

This practice isn’t normal and is not advisable, according to a massage and spa industry expert contacted by USA TODAY Sports. Professional spas and massage therapists typically provide their own draping for clients. That draping also is usually large enough to make sure there isn’t any unwanted exposure if the clients are nude or in their underwear underneath.”

“At the beginning of the session, Watson did not want to use the draping that is typically used in a massage,” the suit states.

“Instead, he requested a small towel. Watson also insisted on starting the massage with him lying face up,” it continues.

The attorneys for the accusers believe that him bringing his own towel meant he could expose himself as much as possible. They also pointed out that he would be able to take it back with him so the masseuse wouldn’t have any DNA evidence.

“They say his insistence on bringing a personal towel to these sessions is evidence of his intent for sex and not simply a professional massage. Their lawsuits suggest the towel he brought was small enough to make it easy to expose his private parts to these women during these encounters. The attorneys also say he brought his own towel so he could take his towel back with him, lowering the risk of leaving any DNA evidence behind.”

Watson’s lawyers say he brought his own towels just because it made him more comfortable and the usual draping that massage therapists use makes him hot.

From how things are unfolding, Deshaun Watson is in some deep sh*** if his lawyers do not pull some legal magic in these lawsuits.

Prev1 of 4Next
In this article:Deshaun Watson, Headline, Tony Buzbee