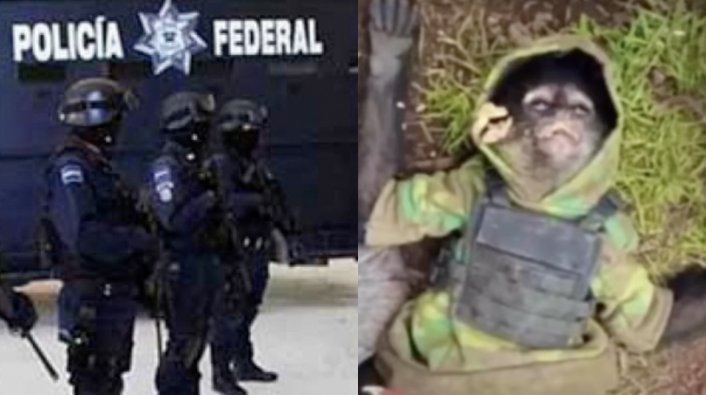 A monkey in a bulletproof vest got killed during the “Cops vs La Familia Michoacana Cartel” shootout. According to CBS News, the shootout between federal forces and the Familia Michoacana cartel recently occurred in a residential neighborhood in Texcaltitlan (Mexico).

The unyielding gunfire between both sides resulted in 11 gang members being killed and three members of law enforcement being injured. The heated exchange of gunfire sent a plethora of animals belonging to the cartel in various directions.

Shortly after the showdown, a large Bengal tiger was seen roaming the streets while a dead corpse of a monkey in a bulletproof vest was recovered from the scene after the law enforcement gained control of the area. It is being widely speculated that the primate died in the arms of its owner, who was also killed in the exchange of gunfire, but that notion cannot be confirmed until after an autopsy has been performed.

In the aftermath of the aforementioned incident, seven gang members were arrested for their transgressions, authorities recovered about 20 assault riffles and the deceased monkey was given its own Corrido (a commemorative traditional folk song) to honor its life. Law enforcement officials in Texcaltitlan are strongly considering the idea of adding animal trafficking charges to their case against the Familia Michoacana gang members who survived the infamous shootout.

“A primate was killed at the scene, which was presumably owned by a criminal who was also killed at the scene,” state prosecutors said in a statement, adding “an autopsy will be carried out on the animal by a veterinarian specialized in the species” and animal-trafficking charges would be considered against the suspects who survived the shootout.

Then on Wednesday, the Attorney General for Environmental Protection said it had seized a tiger in Tecuala, in the Pacific coast state of Nayarit, near the border with Sinaloa, which is home to the cartel of the same name.

The office said it acted “after receiving reports about a Bengal tiger that was wandering the streets of Tecuala,” and found that the animal was being illegally kept there.

Those reports were based on a video posted on social media earlier this week, showing a young woman shrieking as she came across the tiger on the street in a residential neighborhood. “Be quiet, it might come close,” a woman can be heard saying on the video.

Prev1 of 7Next
In this article:Familia Michoacana cartel, Headline, Pablo Escobar