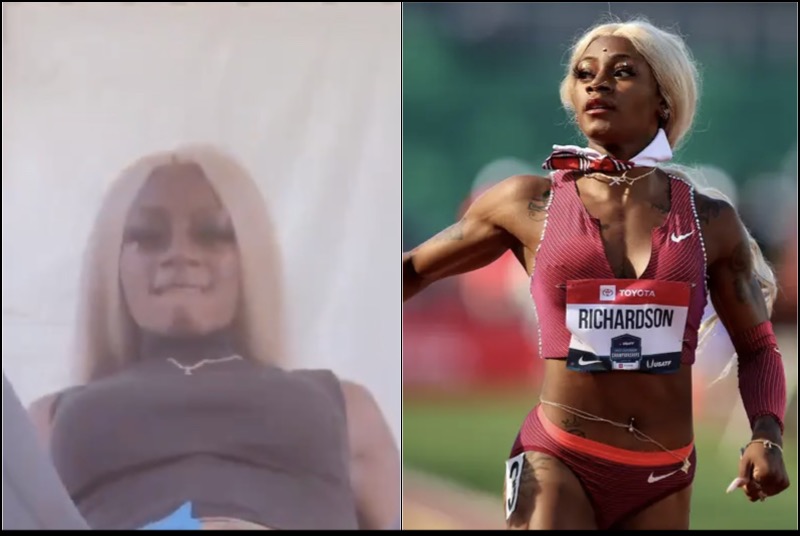 Sha’Carri Richardson after being lashed out on the internet after crashing out of the US Championships is on Twitter throwing shots at her haters. She released a video of herself spreading her legs wide as a jab at those bashing her for her poor performance at the Championships via TPS;

After failing to qualify for the 200-meter final Sunday to end her hopes for an individual medal at the USA Track and Field Outdoor Championships, sprinter Sha’Carri Richardson gave a fiery statement to reporters.

“I’m coming to speak, not just on my behalf but on all athletes’ behalves, that when you guys do interviews, y’all should respect athletes more,” Richardson said. “Y’all should understand whether they’re coming from winning, whether they’re losing, whatever the case may be. Athletes deserve way more respect than when y’all just come and throw cameras into their faces.

“Understand how an athlete operates and then ask your questions. Then be more understanding of the fact that they are still human, no matter just to the fact that y’all are just trying to put something out in an article to make a dollar. Thank you.”

Richardson wasn’t nearly done as she had a strong message to her supporters and haters on her Instagram story.

“I really don’t got nothing to explain to yall, but to my supporters, I wanna thank yall. It’s been a long road and it’s not over yet. To my haters, I got another video for yall.”

The final video to her haters showed Richardson laying on her back and spreading her legs towards her haters. The caption on the video stated, “To the one that swear they know me and my story and think track run my life.”

“I would tell ya’ll to kiss my ass, but yall can’t afford it.”

There is more on Sha’Carri Richardson failing at the US Championships;

The 200 finalized a rough U.S. meet for Richardson, who bombed out of the 100-meter competition, her signature event, after just the first round on Thursday night.

Richardson had qualified for the Tokyo Olympics in the 100 but did not compete after testing positive for marijuana. She was handed a 30-day suspension that kept her out of the event in Tokyo, and she hasn’t been able to bring back that fire she once had in the sport.

Prev1 of 5Next
In this article:Headline, Sha'Carri Richardson