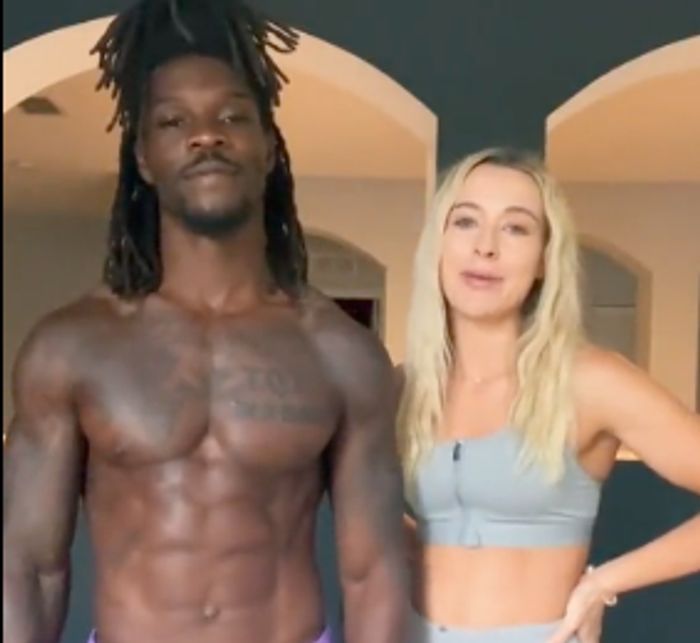 Twitter is trashing this white girl who referred to her Black boyfriend as a slave who she bought on the slave market in 2018. She’s reminded black people that they were bought, which has caused an uproar on Twitter.

It was all jokes, but Twitter isn’t seeing it that way as they are trashing her and calling her out for referring to her black boyfriend as her slave. In the end, she kissed and hugged him.

It doesn’t matter if it’s a trend, why don’t black ppl participate in the trend of owning banks and schools and hospitals and not being deadbeat or irresponsible parents. It’s stupid trends like this we like. Nice dreads tho

If you’re going to make comments like this please do your homework. Just because the MEDIA constantly shows you black parents who are irresponsible doesn’t negate the fact that STATISTICALLY that isn’t the case. Don’t fall victim to such blatant ignorance.

Statistically 6 million African American children grow up in a single parent home (highest) & 13 out of every 1000 kids (2nd highest) is a victim of child abuse. They also account for 22% of the foster care system despite them making up a small amount of the population

I need you to be well versed in your history and how it’s gotten us where we are today before you wanna talk cash.

This is some stupid trend on TikTok that these two obviously didn’t think through before they posted the video. As someone in the comments said would she say this in front of his mother or grandmother? It is giving out really cringy “GET OUT” vibes. Even if you didn’t mean any harm you have to have more situational awareness than this.

Flip to the next page to watch the video and her getting crushed on social media. Off-topic homeboy does look like Jimmy Butler…