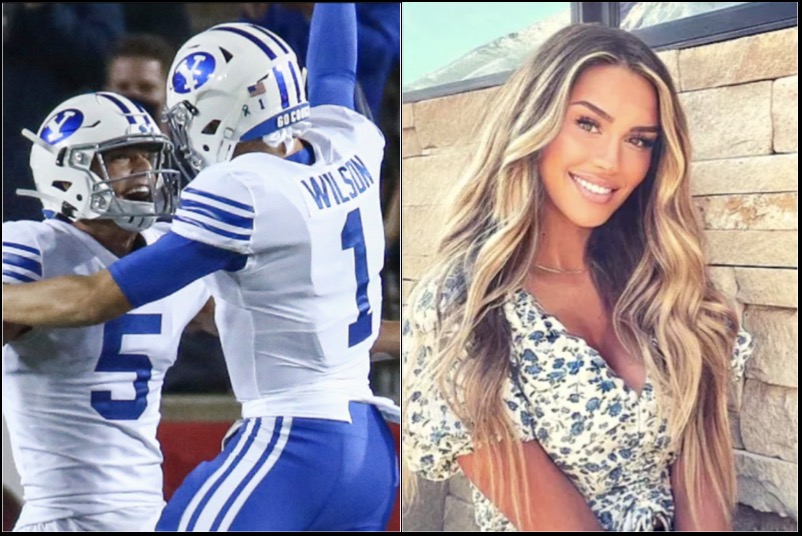 The Zach Wilson rumor that he got his mom, Lisa Wilson’s best friend, laid isn’t dying off anytime soon. In the latest episode of that wild rumor, his ex-girlfriend Abbey Gile’s current boyfriend Dax Milne is getting trolled at training camp by his own fan base.

Dax Milne is getting plenty of attention for non football related activities. The sports world was shook to its core when Zach Wilson’s ex-girlfriend, Abbey Gile, accused the New York Jets QB of sleeping with his mother’s best friend. That information only came about after she started dating his former best friend,  Dax Milne.

Milne is currently at training camp with the Washington Commanders, and even his own fan base seems to be giving him a hard time about the viral mess.

“Dax Milne just caught a pass along the sideline and some fans yelled, “Mr Steal Your Girl!”

Milne was a wide receiver and teammate to Wilson at BYU. They were allegedly pretty tight.

Zach and Milne were best friends until this happened.

Before this week, not a soul knew who Dax Milne was or that he played professional football. He has made a name for himself in the worst way after social media found out what he did to his former college QB.

The Washington Commanders WR went viral in the worst way after he posted photos on Instagram showing that he was now dating Abbey Gile. If you’re not familiar with her, she is the ex-girlfriend of New York Jets QB Zach Wilson.

Once social media got ahold of this news, Milne became public enemy Number 1 for breaking the bro-code.

Wilson and Abbey Gile had been dating each other since their teenage years, all the way until at least January 2022 when they suddenly scrubbed each other from Instagram.

Wilson would then be spotted with a brand new model.

During a showdown between the New York Yankees and Tampa Bay Rays, eagle-eyed fans spotted Wilson with a mystery blonde beside him.

His ex-girlfriend clearly wasn’t thrilled and knew the best way to get back at him was to date a good friend.

Abbey Gile tried to clap back by saying Wilson slept with his mom’s best friend but that only led to people saying Wilson has that DOG in him.

Wilson has moved on with a new lady, and it appears that Abby has as well, but there is a plot twist. Abby is dating Wilson’s best friend and former roommate at BYU, Washington Commanders WR Dax Milne.

But there was a DOUBLE plot twist when it was revealed that Wilson cheated on her by sleeping with his mom’s Lisa best friend.

I kid you not.

Zach Wilson scrubbed his old girlfriend, Abbey Gile, from his Instagram account earlier this year. In return, she has now scrubbed one of his best friends from his life.

Fans immediately took to her Instagram and blasted her on her latest picture.

One person called her a ‘homie hopper’ and Gile fired back by exposing that Wilson slept with his mom’s best friend.