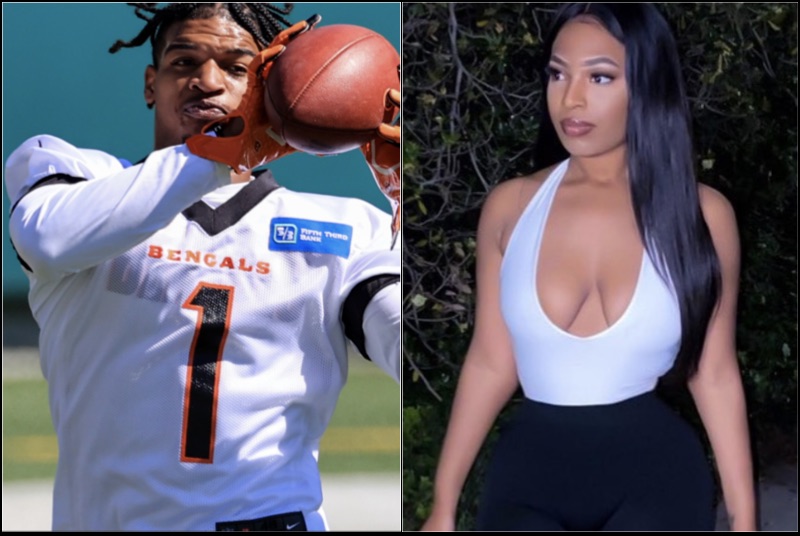 Ja’Marr Chase’s baby mama Ambar Nicole wants the NFL to do her a favor and kick him out of the league over her claims that he’s an abuser and a deadbeat dad (would defeat the purpose because he wouldn’t be able to provide for their child). Amber claims that he has been threatening her, too, via Side Action;

Chase’s baby mama Ambar Nicole is calling out the NFL star for what she considers abuse.

“Get this abuser Jamarr out the league. I’m tried of this abuser and deadbeat abusing me and threatening me. Calling your own child a bi*ch.  And having your mom threating to come to my house. You cannot call yourself a man you are in fact a horrible person.“

She also shared some text messages between the two, and made sure to tag the NFL and Chase’s employer, the Cincinnati Bengals.

She then goes on to call him out for being a narcissist.

Jamarr Chase is having a tough time getting going with the amount of attention he’s getting from defenses. Now he’s getting attention for some off the field problems he’s apparently dealing with. The Cincinnati Bengals are 2-3 and missed an opportunity to take the lead in the AFC North after losing to the Baltimore Ravens on Sunday night.

It hasn’t been a great season for Chase and the Bengals after making a Super Bowl appearance last season. Now he’ll have to deal with this issue. This  isn’t the first time Ambar Nicole has accused Chase,  Nicole appeared to insinuate that she was pregnant with Chase’s baby, and seemed to make a claim that the receiver hit her while she was pregnant.

This isn’t the first time Ms. Nicole has spoken badly about Chase. She initially said he didn’t like to shower after practices.

One has to wonder if she is saying this just because she isn’t with Chase anymore. Furthermore, she has never reported anything to the police, so you can’t just accuse people without showing some actual proof, but she does mention taking Chase to court.

Flip to the next page for the drama and text messages.

Prev1 of 6Next
In this article:Ambar Nicole, Headline, Ja'Marr Chase