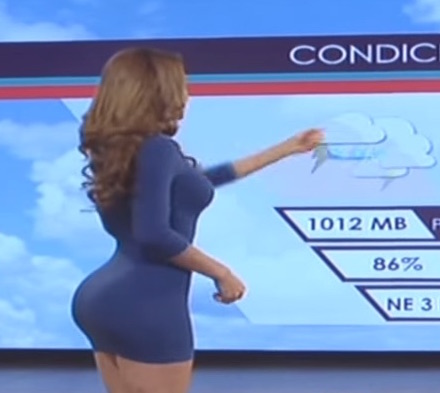 Yanet Garcia is encouraging empathy and she spiced it up by showing off her goodies in black lingerie. She posted the photo to her Instagram page with the caption;

Empathy is the medicine the world needs

Yanet Garcia showed that she was more than just a pretty face as the stunning weatherwoman shared a message about empathy while wearing lingerie.

Yanet displayed incredible wisdom and compassion in the post with a touching caption that accompanied the lingerie picture.

For those out of the loop, Yanet’s job as a weatherwoman was what caused her to go viral and gain fame. Some fans found Yanet’s curves to be captivating as she predicted the weather on Mexican TV.

Yanet wisely leveraged her television fame into a modeling career and has continued to show her dynamic personality, including with her most recent post.

The post showed Yanet as she posed while sitting on a furry rug with a neutral background. She crossed her legs and pointed one toe as she worked her angles in black and white. The monochrome shot gave the image a stripped-down vibe that suited the model.

Yanet rocked a dark bra and underwear set with a sheer mesh coverup on top of the ensemble.

Her thick luscious waves cascaded down her chest, and she placed one hand under her chin for a striking pose. She donned soft glam makeup and a matte lip as she gazed into the camera for the beautiful image.

She accessorized with two bracelets and a ring on her index finger.

Yanet geotagged Manhattan, which has become her home base since she hit it big as a model and influencer.

Remember when the gamer broke up with her because she was distracting him from playing Call of Duty? Those were the times.

Flip to the next page for more of her thirst traps…

Prev1 of 5Next
In this article:Headline, Yanet Garcia