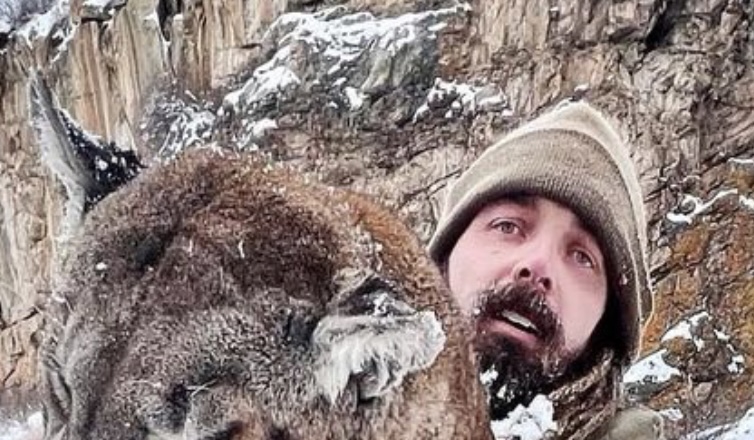 Ex-NFLer Derek Wolfe will get bashed more for revealing what he intends to do with the mountain lion he killed. He got backlash for posting the carcass of the lion to his Instagram page and now, he says he plans on eating it.

The animal activists will definitely come at him hard.

Derek Wolfe does not plan to let the enormous mountain lion he slayed go to waste.

Wolfe, a former defensive lineman and Super Bowl champion with the Broncos, was enlisted to kill a mountain lion that was terrorizing a neighborhood in the Rocky Mountains last week.

“In Colorado since 1990 there’s been 23 human attacks, so that means every other year there’s been a human being attacked by a mountain lion,” Wolfe said. “Just last year, in a town up by Boulder, 15 pet dogs were killed in 30 days. People were calling Parks & Wildlife, being like, ‘Where you at? Why aren’t you coming to help us?’ ”

Wolfe said he got a call from a close friend and was happy to provide support.

“We get up there and the first thing we see is a full-grown mule deer that he had drug across the road, right across the street from someone’s house. We followed those tracks up to a porch. It was up on this woman’s porch, living underneath her porch even. When we talked to the land owner, she said that they had house cats that were acting weird and were wondering why. Well it’s because you have a full-grown, 200-pound, 8 ¹/₂-foot mountain lion walking around across your front yard.”

He said be brought dogs with him to force the big cat up a tree.

“I’ve been through some tough training camps, brother, but this hunt beat me up bad. I’m all cut up and scraped up. I was in full body cramps. Barely made it up there. The cat itself, when we finally got to it, was at 9,600 feet altitude. You’re sucking air up that high. I was able to make a good shot, a good ethical shot, and harvested the cat, and got him out of there. Did everything by the book. This was completely legal. CPW [Colorado Parks & Wildlife] came down. Checked everything out for me.”

Wolfe has come under fire for killing the mountain lion.

“I can’t believe what’s happening to me,” Wolfe said. “Doing something legal, by the book, they’ve had 200 calls to Colorado Parks & Wildlife trying to turn me in like I did something wrong. Did nothing wrong. Everything’s legal.”

Humans don’t seem to understand they are encroaching on the animals house. If someone came into your house unannounced you would take them out just like the Mountain Lion.

Flip to the next page to watch Derek Wolfe speak…

Prev1 of 5Next
In this article:Derek Wolfe, Headline, Mountain lion