One the same day Terrelle Pryor fled Columbus, we have Colt McCoy’s wife Rachel, who obviously didn’t get her degree in Communications or she would have known this is not a good time to be snitching, even unintentionally.

For some reason she thought it would be a good idea to go on Colin Cowherd’s nationally syndicated ESPN radio show and  say, Colt McCoy didn’t take from agents, but everyone else at Texas did.  Here are some quotes from Deadspin.com

Regularly it’s just dinner. People in Texas are just being friendly, they don’t mean anything by it at all. They don’t realize realize most of the time it’s a violation. At Texas you’re taught to take absolutely nothing, I don’t care if it’s a hot dog or soda.

But you’ve got guys, grown adult men with law degrees – educated men – what are they going to gain out of this? It’s to say, ‘Hey, I bought so and so dinner, hey I took so and so to do this’ … It’s grown men and their pride.

“You cannot expect 19, 20 year-old kids to say no to free stuff when they’re in college.” She says a bunch of McCoy’s Texas teammates couldn’t resist free stuff from agents or boosters. 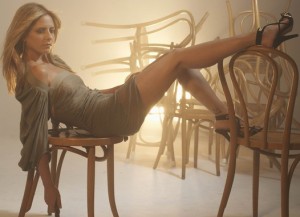 It’s tough when you see things that could be handed to you that seem so minor: a dinner, a hunt here or there, a fishing trip, you know things like that that most kids don’t even realize are illegal. … My personal opinion is that most of these boosters aren’t giving these guys cars to play better, they’re not gonna play better if you give them a car. They want to be remembered down the line when they make it to the NFL. I think they’re thinking that’s what’s gonna happen. But they’re not going to be remembered because they bought them a car, all these things that are getting all these guys in trouble now.”

We all know that Texas like every other major college program is dirty, but don’t go on the radio and give the NCAA a reason to snoop around.

Message to Colt McCoy, come get your girl, she is going to have your college on probation.

Sports By Brooks has some audio.

ESPN RADIO: THE HERD WITH COLIN COWHERD by sportsxbrooks