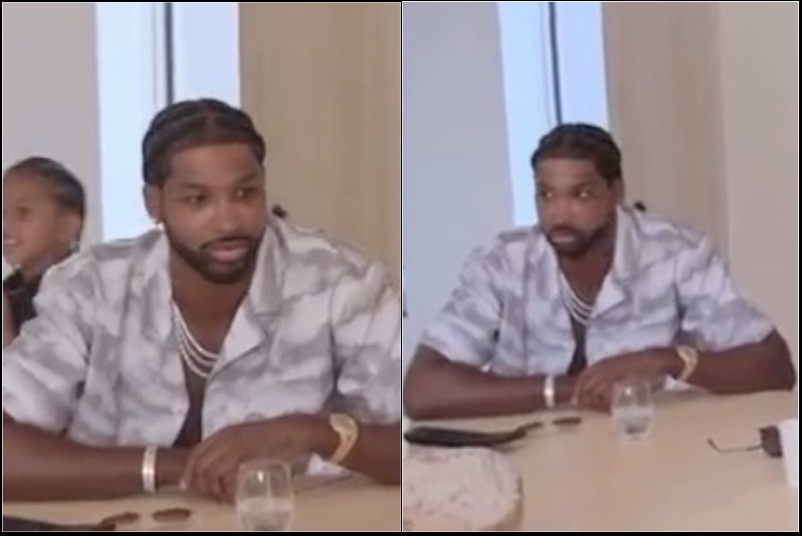 Serial cheater Tristan Thompson is always on alert not to let Khloe Kardashian get news of him cheating on her again anytime he cheats and in the latest episode of The Kardashians series which was premiered last week, Tristan looked scared and thought Khloe had caught him again cheating on her with another woman.

The show primarily focused on Kim Kardashian getting wind of a possible new s*x tape. And she got the news  on her son’s Roblox game – which sent her into a blinding fury.

Kim went bonkers and threatened to “burn” Ray J’s former manager, Wack 100, and others involved in the situation.

While Kim’s narrative was the primary focus of the scene, Tristan got dragged into it. At one point, Kim called Khloé over to look at what she had discovered on her son’s iPad.

True Thompson’s dad saw this – and he FROZE UP, and looked like he just saw a ghost. It’s pretty clear that Tristan thought he had been caught cheating, again.

Alongside a handful of screenshots of the NBA player’s terrified expression, one user wrote, “Nah you gotta re-evaluate your life if this [is] how you react when anyone finds anything suspicious around you…Buddy experienced four levels of fear in three seconds.”

Tristan Thompson will cheat again and we all looking forward to that news.

If you are a cheater you have to deal with this constant paranoia that you are going to get caught. It is like if you murdered someone in 1980, you always wonder if the cops are going to knock on that door. Tristan is a serial cheater so the chances of him getting caught are high and eventually he did when he got Maralee Nichols pregnant.

Flip to the next page to watch that moment and the hilarious Twitter reactions.