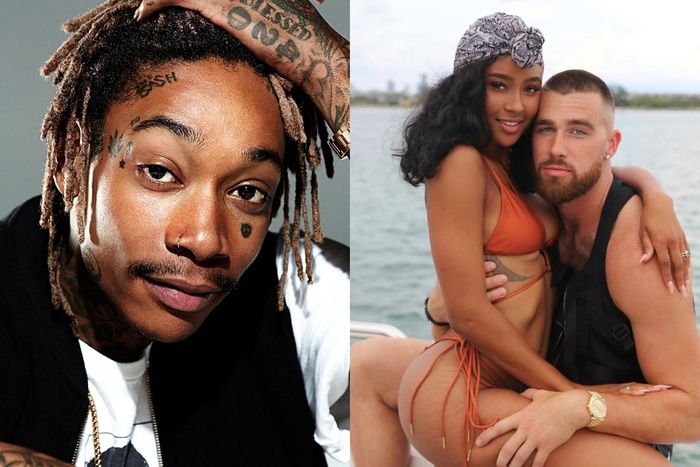 Travis Kelce is done with Kayla Nicole even though there is a rumor out there of them getting back. In a wild rumor circulating on the internet, Kayla is hooking up with rapper Wiz Khalifa.

It’s reported that Kayla was seen with Wiz during the NBA summer league via Side Action;

Kelce’s off the field conquests are also heavily covered too. He’s been in an on-and-off relationship with his girlfriend Kayla Nicole for years. It was just last week we spotted Kayla liking Travis’ latest post, which sparked reconciliation rumors.

Earlier this year Travis and Kayla split, reportedly over issues Travis wouldn’t spend any money on her.

Now she’s appearing to have moved on, at least for now.  Kayla Nicole had been spotted out in Las Vegas with a rapper.

“Word on the curve was #KaylaNicole was in Vegas with #WizKhalifa During NBA summer league….”

Khalifa is definitely out in Las Vegas for an appearance at Drai’s Nightclub.

It is obvious that Ms. Nicole needs her a baller or rapper before the holiday aka Christmas season arrives.

The Kansas City Chiefs Tight End Travis Kelce and his long-time girlfriend Kayla Nicole seemingly broke up again back in May. This time the alleged reason for this breakup had nothing to do with “cheating” but rather for Travis being stingy with his expenditures. Reportedly, the 32-year-old was making his fiance pay half for everything they did during the relationship.

Kayla even took to Social Media to comment on the alleged reason for their split.

Now as football season approaches, it appears Kayla and Trav are on the mend. Or at the very least they’re in the beginning stages of a potential reconciliation. Our source tells us Travis and Kayla have started talking again.

“Travis always likes time off during the Summers, but once Football season starts, he wants Kayla there by his side. He enjoys her coming to see him at the games,” according to our source.

Kayla just like Travis’ most recent post, which of course has everyone thinking they’re getting back together.

Back in 2020, the duo split up for the first time publicly being in a relationship since 2017. The former Super Bowl Champion was alleged for cheating behind her back, causing rifts between the duo.

“This is fake news … a lie … and not why Kayla and I broke up. Take all your hatred somewhere else please,” he wrote on Twitter back then.

Flip to the next page for more about Kayla hooking up with Wiz while waiting for Kelce to take her back and her lovely thirst traps.

Prev1 of 5Next
In this article:Headline, kayla nicole, Travis Kelce, Wiz Khalifa