I have never watched an episode of Jersey Shore— I know who Snookie is, but for the most part, I just assume that it is just a wilder version Real World.

The one thing I do know is this: The Situation made something like six million dollars last year— the Basketball Wives could learn a thing or two about marketing and promotion from him.

According to The Big Lead, Terrelle Pryor was a bit giddy about getting this picture with Sammi.

Terrelle Pryor recently tweeted this picture of himself with Sammi from Jersey Shore. 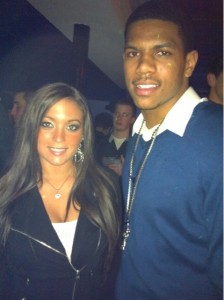 Based on reader investigative skills, the picture was taken at Club LIV in Miami.

She is cool looking, nothing to email Jim Tressel about, but I digress.