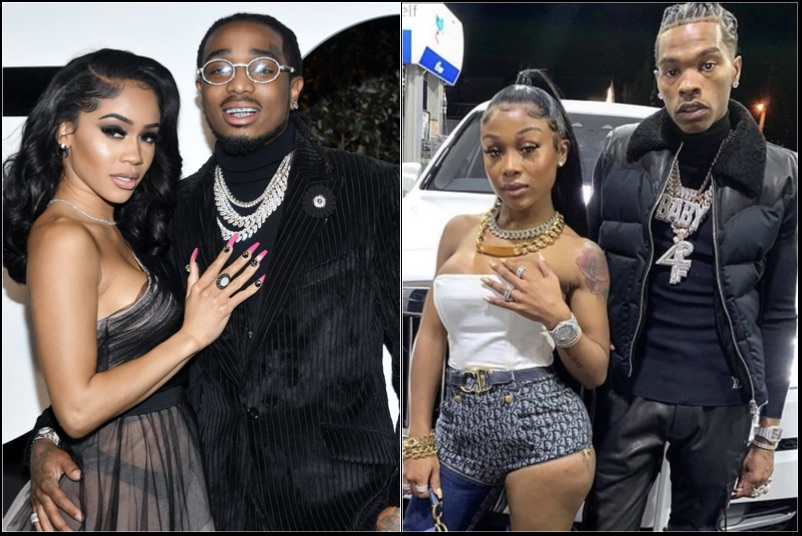 Lil Baby and Saweetie sent social media into a little of a frenzy after it was revealed the two were dating.

There were plenty of reactions, but the biggest one came from Saweetie’s ex-boyfriend Quavo who said Lil Baby and him could make a swap.

Lil Baby and Saweetie dating rumors emerged last week after Baby reportedly treated the “Icy Girl” star to a $100,000 shopping spree in New York. More fuel was added to the fire on Sunday, November 28th when Saweetie posted a photo of her sitting on a mystery man’s lap as part of an “icy dump” on Instagram. Social media detectives quickly discovered Lil Baby was wearing the same black baggy pants and shoes as Saweetie’s mystery man even after he denied the allegations on Twitter saying “I’m Single.”

Aside from getting cozy on the man’s lap Saweetie was also showered with bouquets of flowers and roses, as seen in a video posted to her Instagram Story on Sunday. As rumors of Lil Baby and Saweetie heated up online, Saweetie’s ex-boyfriend, Quavo, appeared to respond to the rumors on his Instagram Story in the early hours of Monday morning November 29th.

“Ain’t trippin we can swap it out! #QCTheLabel,” he posted on his Instagram story, referencing Quality Control Music, the Atlanta-based label both he and Lil Baby are signed to.

In an interview with Hollywood Unlocked, Jayda says she already knew about the rumors before they got to the internet. She also talks about why she was liking things on social media about the new relationship.

She isn’t shy about saying Lil Baby cheated on her multiple times, but they are still friends because she doesn’t like to burn any bridges.

Flip the page for the video and more of Ms. Cheaves.

Prev1 of 4Next
In this article:Jayda Cheaves, Lil Baby, Saweetie