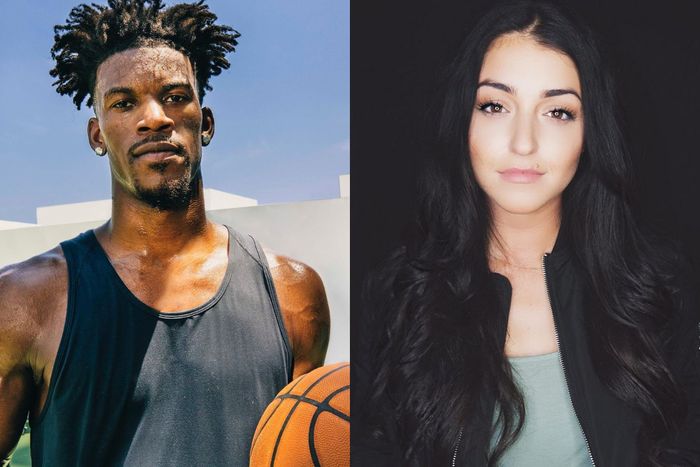 Rumor has it Jimmy Butler and Kaitlin Nowak have been dating since 2019. Kaitlin Nowak have never publicly spoken on her relationship with Jimmy, and she’s always keeping things on the down low. The two don’t even follow each other on social media platforms. Jimmy Butler who was alone in the NBA bubble has raised questions about his love life, he dismissed such rumors saying that he needs to focus on his work.

Supposedly even though Kaitlin and Jimmy aren’t necessarily a couple, she does live with him at his house. Jimmy Butler and the Miami Heat are headed back to the Eastern Conference finals.

Butler finished off a dominant series against the 76ers with 32 points and the Heat took Game 6 of this semifinal, 99-90. The Heat won the last two games convincingly to take the series, 4-2.

Kaitlin Nowak and Jimmy Butler have a beautiful baby daughter, Kaitlin gave birth back in October 2020.

The STREETS saying she is still living with Butler even though the relationship isn’t public.

I am sure Kaitlin Nowak is a very nice person.

Jimmy Butler is doing her a solid letting her and his kid stay with him because Jimmy is a great guy, but she is trying too hard to make it seem like they are a couple when that isn’t the case.

Jimmy is casually dating Selena Gomez and Nowak is just having a hard time with that.

She went to Instagram to show off some cookies Jimmy’s personal chef made for her on her birthday. That’s Jimmy’s kitchen.

Flip to the next page for Kaitlin Nowak’s reaction to Miami Heat’s big win and a few of her thirst traps.

Prev1 of 6Next
In this article:Headline, Jimmy Butler, Kaitlin Nowak, Miami Heat