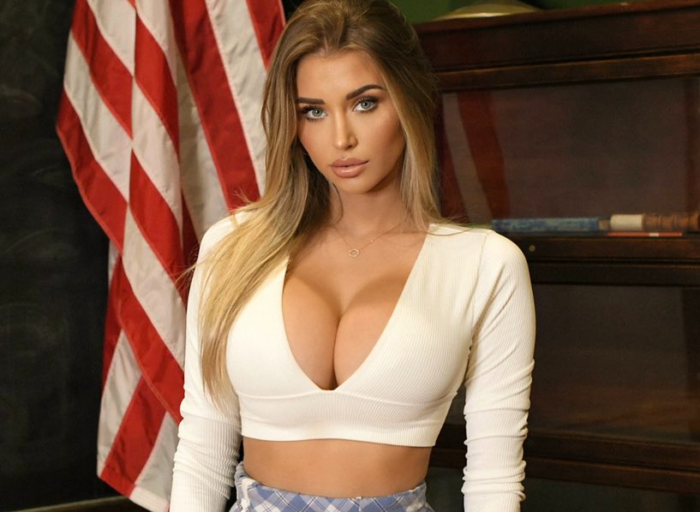 Female Hockey goalie Mikayla Demaiter goes viral over photos of herself showing off her boobs in a schoolgirl outfit. Damn! She looked hot in these pictures and it’s not surprising that she’s gone viral.

Mikayla Demaiter is a former goaltender who has gone from stopping ice hockey pucks, to stopping people’s hearts with every post on social media.

Some may even refer to her as the Paige Spiranac of ice hockey. The ex Provincial Women’s Hockey League goalkeeper turned to modeling at the year of 19, and has over 1.4 million followers on Instagram.

Just recently, she took to Twitter to show her support for the education system by showing off her sexy school girl outfit.

In 2017, she quit her hockey career and finally decided to dedicate her life to modeling. We think she might a great decision.

I am going, to be honest, she made the right decision to retire from hockey.

Demaiter grew up in Woodbridge, a suburb of Toronto, Canada and as a youngster, had a vested interest in ice hockey and boating. At a tender age itself, she joined the Bluewater Hawks in the Provincial Women’s Hockey League. She played as a goalkeeper for the Hawks for a few years before eventually deciding to quit the sport.

Last year, in June, Demaiter took to Instagram to reveal that she had decided to ‘say goodbye’ to ice hockey at the age of 19. Although Demaiter’s retirement came as a surprise to many, reports from the Morning Bulletin suggested that Demaiter opted to retire from the sport after she was forced to undergo a knee surgery. Unfortunately, not much is known about her hockey career stats prior to her making a switch to modelling on Instagram.

Soon after hanging up her gloves, Demaiter decided to dedicate herself entirely to the world of fashion. Over the past year or so, the photogenic Canadian regularly provides her 413K followers with jaw-dropping pictures of herself. Demaiter has sent her fans into a frenzy with snaps of herself in the gym, in swimming pools and on the beach.

Prev1 of 8Next
In this article:Headline, Mikayla Demaiter