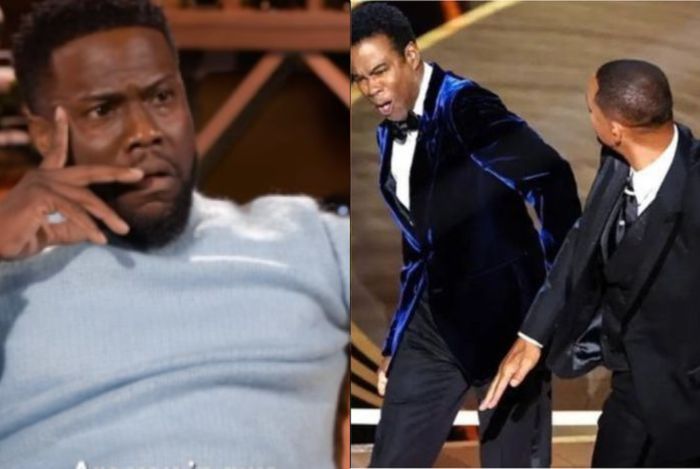 I thought Will Smith-Chris Rock Oscar’s slap brouhaha was over, but it looks like it’s never going to sleep as Kevin Hart has reacted to the mess and defended Will Smith. According to Hart, the world should step out of it!

ET has got more;

Kevin Hart is giving his “brother” Will Smith some appreciation. During his appearance on Drink Champs, the comedian defended the Oscar winner when hosts N.O.R.E. and DJ EFN asked him to choose between Smith and rapper Ice Cube.

Although Hart noted that both Smith and Ice Cube are his “brothers,” he chose the former. He explained that the actor was “not only a legend” but credited Smith for giving a platform to Black actors and creators in Hollywood.

“I’mma say Will Smith, and here’s why: Will Smith is a f**king– he’s not only a legend, he’s not only a GOAT… [he] is the reason why the idea of African Americans attached to global IP is normal,” he declared. “Studios took the gamble on more leads of color because of the work that Will Smith, Denzel were doing in the beginning, right? You need the faces that are giving the universal return. So I’m not gonna s**t on Will and act like he hasn’t been, and wasn’t, that guy.”

“And people make mistakes, and from mistakes they should be allowed time to f**king recover,” he added in response to the hosts’ jokes about Smith, Chris Rock and the Oscar slap heard ’round the world. “And that this is no longer the world’s problem, it’s Will and Chris’ problem. Let them deal with that. The world should step out of it and let them recover.”

It isn’t the first time the comedian has defended the King Richard actor since the incident. In July, Hart spoke with ET at the premiere of his animated movie, DC League of Super-Pets, and addressed the altercation between Smith and Rock.

“Will is apologetic, you know, he’s in a better space, of course, than what he was after,” he said. “People are human and as humans sometimes we make mistakes. So it’s not about talking about the past, it’s about acknowledging the present and doing your best to move forward.”

“I can only hope that the two of them find a way to find some solace in that and move past it,” Hart continued. “I just like good energy. I love to see people be the best.”

“I still love him, I still love Chris, and, you know, you can’t judge a person by one thing,” he added. “Ultimately, life goes on and people grow, so give him the opportunity to do so.”

Hart goes on to imply that the pressure of being Will Smith and being married to Jada likely contributed to the slap.

Prev1 of 5Next
In this article:Chris Rock, Headline, Jada Pinkett Smith, Kevin Hart, Will Smith