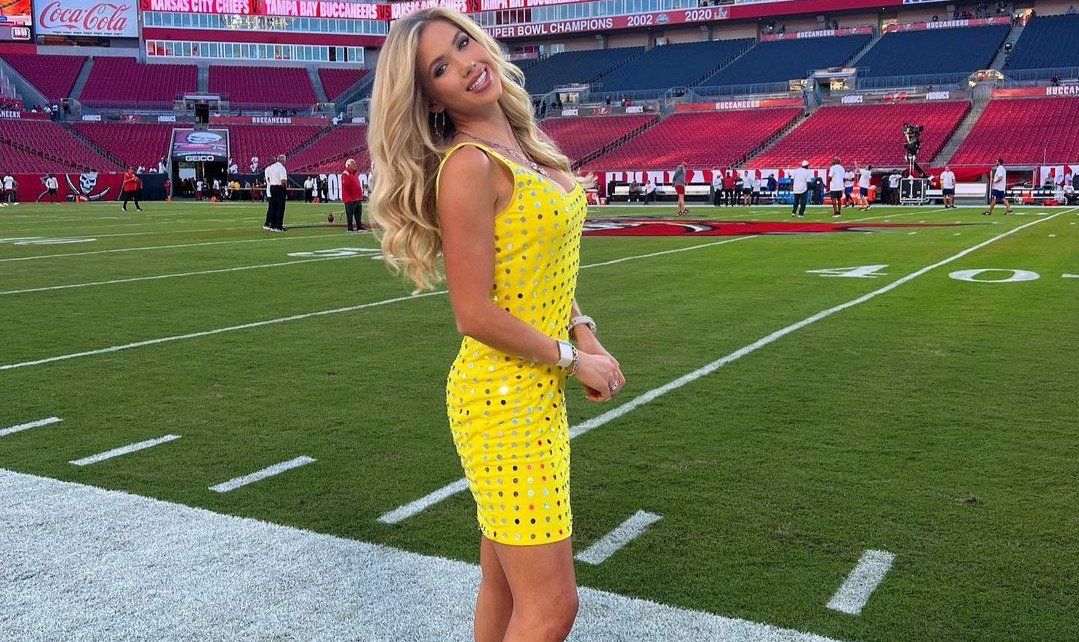 Chiefs owner’s daughter Gracie Hunt always catches the attention wherever she goes and she as expected, the attention was on her at the Raymond James Stadium with her stunning look via TPS;

Gracie Hunt sure knows how to steal the show.

Hunt, a former Miss Kansas USA and the daughter of the Chiefs owner turned several heads as she went out to have a photo op on Raymond James Stadium field.

She could be seen sporting a bright yellow dress.

So far, the Chiefs have been having a dominant performance against the Bucs on Sunday Night Football.

Once again, some Bucs players were willing to risk it all. Maybe that is why they were so bad on defense last night.

Brady completed 39 of 52 passes for 385 yards and three TDs without an interception for Tampa Bay (2-2). The Bucs, however, played from behind the whole night after rookie Rachaad White fumbled the opening kickoff and Mahomes threw his TD pass to Kelce two plays later.

The Chiefs also got into the end zone on three of their next four possessions, with Mahomes repeatedly shredding the Tampa Bay defense with pinpoint passes and Edwards-Helaire and Isiah Pacheco taking turns running the ball effectively.

“It’s a team sport. We didn’t play great on offense. We didn’t help (the defense) much, either,” Brady said.

“We didn’t do great in the first half. Too many missed opportunities on third downs, turnovers. We gotta play a lot better to be one of the good teams,” the seven-time Super Bowl winner added. “We haven’t played our best yet this year.”

Chiefs cornerback L’Jarius Sneed sacked Brady, forcing a fumble that Mahomes turned into Gray’s TD, with the tight end taking a direct snap from center on the 1-yard plunge that put Kansas City up 28-10.

Kansas City finished with 417 yards of total offense, including a 189-3 edge on the ground, against a defense that had allowed a league-low 27 points through three games.

“Everything in this game fell on the defensive side of the ball,” Bucs coach Todd Bowles said. “You name it we did it. Missed tackles. Missed assignments. Bad calls.”

Prev1 of 7Next
In this article:Gracie Hunt, Headline