USC Gave Lincoln Riley a $110 Million, a Private Jet, a $6 Million Mansion in LA and Bought Both Of His Oklahoma Houses For $500k Over Asking Price – BlackSportsOnline 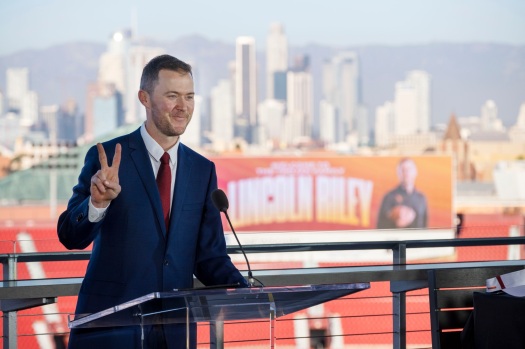 This is the greatest contract in the history of contracts.

If Lincoln Riley hadn’t taken this deal, I would have flown to Norman, Oklahoma, myself and slapped him and his mama (I checked to see if his mother was alive before making that comment).

Here is a breakdown of the deal.

I think Oklahoma is a fine university, but you can’t turn this down. It is funny, though, because USC was quick to try to erase Reggie Bush’s history when his family was “helped” with a house, but they are just giving away private jets to coaches like it is candy.

All Lincoln Riley had to do was say yes, take a three-hour flight, change the shade on his red tie — from crimson to cardinal — and he was suddenly in sunny, 75-degree late November weather, standing inside the Los Angeles Memorial Coliseum Monday afternoon being introduced as the 18th head coach in USC football history.

“Wow, is this real? Unbelievable,” Riley said, turning around to take in the Los Angeles skyline on one side, the Hollywood sign on the other. “It’s a surreal moment, to be honest.”

“It was tough to leave the place I left,” Riley said when asked about Oklahoma. “But at the same time, I knew this was the right thing.” When asked later about the sentiment that Riley left Oklahoma because of their impending move to the SEC, Riley said it had “zero impact” on his decision.

It doesn’t seem like it was that hard of a decision.

He has left OU in shambles with many of their star recruits from the West Coast ready to relocate to USC.

As you can imagine, Twitter had a lot of thoughts on the contract. Flip the pages to check them out.