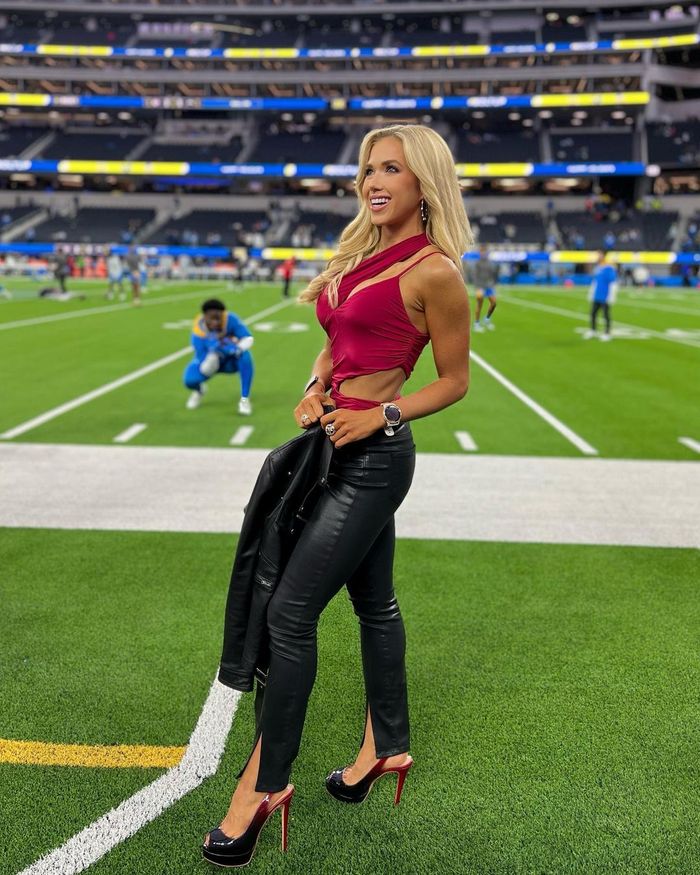 The Kansas City Chiefs heiress Gracie Hunt is hot and she’s turning heads with these red hot pictures of herself for playoffs. She is probably dropping these pictures to let her recent date Bachelor star Tyler Cameron know she’s hot and deserves to be taken to the altar.

Following some tough early-season struggles, the Kansas City Chiefs were able to right the ship and get themselves back to the form we’re all used to. The Chiefs locked in the #2 seed in the East, and they will play the Steelers at home on Wild Card weekend.

Some are referring to this game as Big Ben’s retirement party. The Chiefs are ready to roll, and this couldn’t be any more evident than by taking a look at Chiefs heiress Gracie Hunt’s latest Instagram post.

She posted some red hot pics. “Looking at the playoffs like”.

Here is a little more info on how she went from soccer star to thirst trap queen.

The pageant life was not initially part of Gracie Hunt’s game plan.

A budding soccer star, the daughter of Chiefs owner Clark Hunt yearned for a future on the field. She had hoped to play at college at SMU after starring on her high school team, but four concussions derailed that dream. Fortunately, when the now-22-year-old philanthropist decided to segue to the stage, she had a familiar face — not to mention a pageant expert — in her corner: mom Tavia Hunt.

“I went and I watched my first one with her when I was around 17 years old, and it was a foreign industry to me,” Hunt recently told The Post. “I was like, ‘OK, you’ve done this, I clearly have no idea what’s going on, but can you help me?’ And she said, ‘I’m not sure because you walk like a soccer tomboy, but we can give it a shot,’ and the rest is history.”

Earlier this year, Hunt was named Miss Kansas USA, a title Tavia held in 1993 when she competed in Miss USA and was later named the second-runner up. Hunt followed in her mother’s footsteps again in November, when she participated in Miss USA and placed in the Top 16.

“It was a wonderful experience, truly, the whole week was,” Hunt said of this year’s Miss USA pageant, in which Miss Kentucky’s Elle Smith won the coveted title. “I just had the best week and a great time.”

Flip to the next page to see Gracie Hunt’s hot pictures.

Prev1 of 7Next
In this article:Gracie Hunt, Headline, Kansas City Chiefs, NFL Playoffs