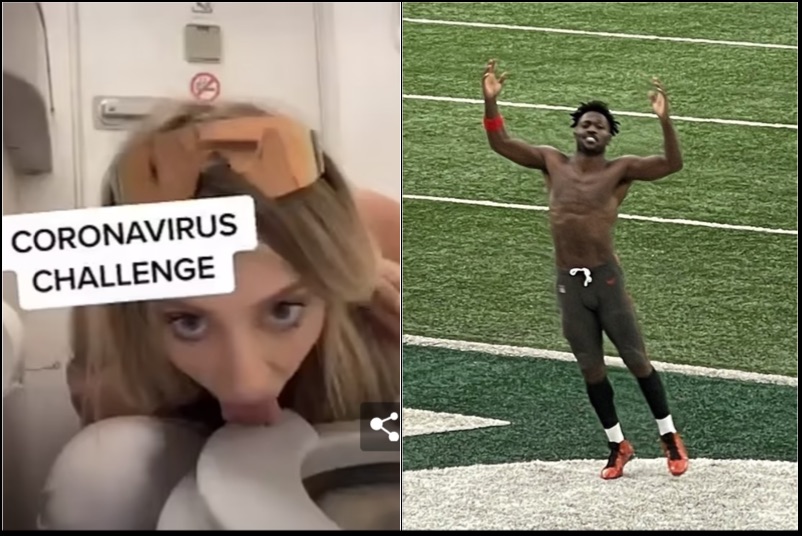 Ava Louise has dropped bombshells! According to her, she had sex with Antonio Brown the night before he left the field shirtless against the Jets. She also talked about Antonio Brown confiding in her about his fake vaccine card.

According to Ava Louise, before they got in to banging each other that night, Antonio told her that a bunch of the NFL players have got fake COVID vaccine cards.  It appears that AB was very nice to her and how did she repay him?

By going on a media tour and calling him a 30 second brother.

NFL star Antonio Brown smuggled the influencer who went viral for licking a toilet seat into his hotel room for a steamy romp the night before he stormed off the field during a game, DailyMail.com can reveal. Brown, 33, snuck glamorous lingerie blogger Ava Louise, 23, into the Westin in Jersey City, New Jersey last Saturday in defiance of the NFL’s Covid rules – and filmed a series of pornographic videos during the romp.

Blonde Louise, who shot to fame in 2020 after she filmed herself licking a toilet seat in a bid to catch Covid, told DailyMail.com she spent an hour with the wide receiver and snuck past security to join Brown for the sex session. Louise told how she snuck into the elevator behind other guests and hit the button for the sixth floor where Brown met her and pulled her into his room – 611.

Inside, she says the 33-year-old began ranting about ‘bulls**t Covid rules’ and repeatedly told her, ‘f*** the NFL’. She says he then went on to tell her he is ‘insane’ before adding: ‘You don’t even know my crazy right now. You don’t know my crazy right now.’ Despite her concern over his mumbling, the pair went on to have sex – which Brown insisted on filming for her Only Fans account.

Antonio Brown should have said no to White Women in 2022.

Flip to the pages to see her talk about the encounter on WFAN660 radio, the text messages she leaked and photos of her licking a toilet.