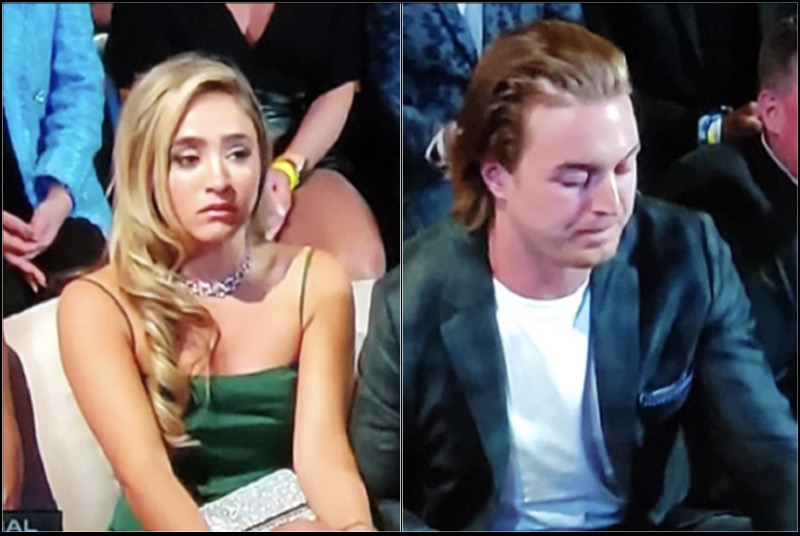 Fans are calling out Kenny Pickett’s fiancée Amy Paternoster for looking mad and unhappy as Kenny slid down the NFL draft. From the videos captured by ESPN, “Pickett’s fiancée looked mad or very concerned he kept slipping down in the draft.”

Fans couldn’t understand why she got mad and had to call her out on Twitter via TPS;

Kenny Pickett, regarded by some as the top quarterback prospect in the 2022 NFL Draft, appeared somber at a party with his loved ones as the night continued to go on and he hadn’t heard his name called yet.

ESPN cameras panned to Pickett, who played college ball at Pittsburgh, and his family throughout the night. Those frowns would turn to happiness when the Pittsburgh Steelers selected him with the No. 20 overall pick on Thursday during the first round of the 2022 NFL Draft.

Pickett was a four-year starter at Pitt who progressively improved each season. The Heisman Trophy finalist passed for 4,319 yards and a whopping 42 touchdowns with just seven interceptions in 13 starts in his final season, leading the Panthers to an 11-2 record.

Here is the good news once Pickett was drafted she lost it.

Kenny Pickett and his loved ones are breathing a collective sigh of relief.

Moments after the former University of Pittsburgh quarterback, 23, was seen on camera looking somber in an apparent draft-day slide, the Steelers selected the New Jersey native with the 20th overall pick in the 2022 NFL Draft.

Pickett, one of the notable quarterback prospects in this year’s class, was seen chatting on the phone beside his fiancée, Princeton soccer player Amy Paternoster, who could hardly contain her excitement.

Clad in a green mini dress, Paternoster — who got engaged to Pickett in January — was seen warmly embracing the quarterback as the entire room erupted into cheers.

Pickett was the first quarterback selected in this year’s draft, with Liberty’s Malik Willis and Matt Corral of Ole Miss still on the board.

Prev1 of 10Next
In this article:Amy Paternoster, Headline, Kenny Pickett